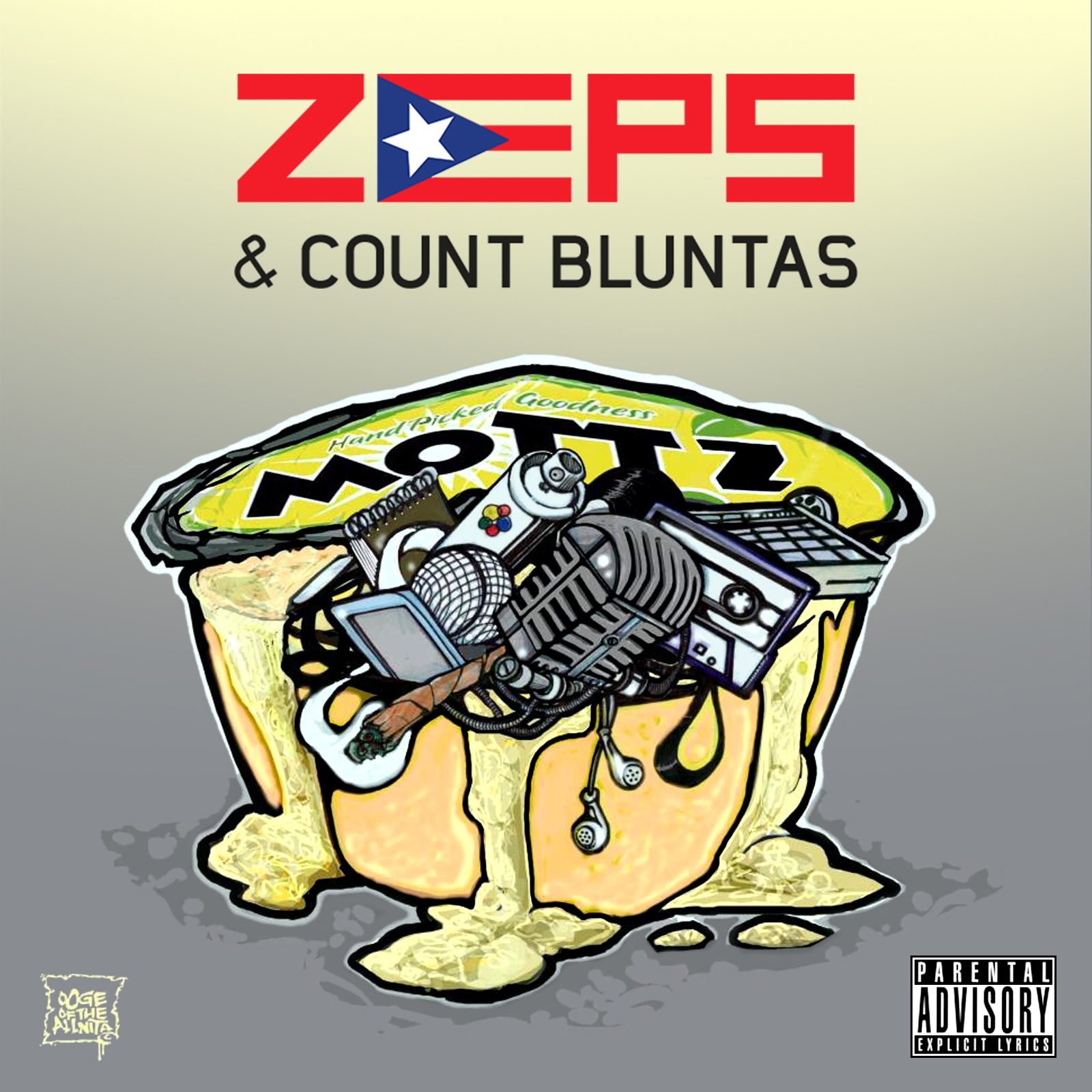 Happy 4/20!!! In celebration of this future national holiday, ZEPS & Count Bluntas are releasing the highly anticipated album “The Mottz.” Two of Brooklyn’s finest collaborate on this saucy mix of beats and rhymes creating a tasty bakers dozen song masterpiece reflecting the South Brooklyn neighborhood they grew up in, Sheepshead Bay.

ZEPS has entertained fans for years with incredible albums, international touring, live freestyles, and outgoing personality. Whether he’s hosting a dance battle in Norway, on tour with DJ Brown 13 in Sweden, performing live in Manhattan, ZEPS continues to leave positive impressions on audiences worldwide. A few years ago, he formed a natural bond with Count Bluntas and they have been banging out tracks like the hotcakes ever since. Count Bluntas has become a staple in the independent scene with numerous production and engineering credits for Golden Goonz Entertainment.

What is “The Mottz”. Is it apple sauce? Yes, but it is also what people in Brooklyn say as a synonym for the best. For instance, “hey bro, did you try that cherry jolly rancher, it’s “The Mottz” or “yo, have you had the pizza at Grimaldis? it’s “The Mottz bro!!”. After you listen to “The Mottz,” hopefully you be saying “hey bro, the Mottz, is the Mottz, now pass the apple sauce.” “The Mottz” is ZEPS’ fourth album release with Golden Goonz. ZEPS and Eturnal Suarez combined forces to create “The SPIX” Episode One & Episode Two.

Featured artists info:
Eddie Cooper:
Broadway World
Eddie Cooper is thrilled to be joining the cast of Little Shop of Horrors. Recent: ABC’s Forever, recurring on Cinemax’s Banshee as Fat Au and the soon to be released HBO series Crime. Raised in Hell’s Kitchen, Eddie is a proud graduate of LaGuardia High School for the Performing Arts and holds a BFA from Ithaca College. @MrEddieCooper

DJ True Justice:
Guirilla Funk
True Justice, aka The Man of Steel, has been a pioneer in the Bay Area Hip Hop scene since 1989. In an era where real deejaying skills have become scare, True Justice holds the torch, and is known for tearing clubs down in every city and every town. No stranger to hustle and showmanship, he comes from the era of constantly packing the vinyl crates and being out on the road!

True’s ambition is to showcase the amount of talent that he has amassed in the last 17 years in Northern California, better known as The Yay Area. While still in high school, True Justice was a hip hop dancer for the Oakland, CA super-group A.P.G. (Action Packed Gangstas), and at the age of 16, he found himself doing concerts with the likes of Digital Underground, Capital Tax, Paris and K-Cloud — while witnessing first hand the birth of the independent hip hop game in the culturally rich Bay Area.

From 1989-91, True studied A.P.G.’s master DJ J-Cutt as he amazed crowds night after night with his show-stealing solo routines with two turntables, a mixer, and two copies of the same record. When he arrived in Berkeley in 1992, True Justice (then known as DJ Skillz), traded his patent leather shoes for two Technic turntables and a Gemini mixer. For years you could see True selling cassette tapes on Telegraph Avenue in Berkeley, CA alongside favorites of today: Living Legends, Saafir, and the Hobo Junction.

In 1996, True formed the All Purpose DJs with Lord Takim, DJ Styles, and DJ Lex. That same year he began a career of show deejaying, first with Dream Nefra, and then later with Mic T, AceyAlone & Abstract Rude, Aesop and Planet Asia. He is currently Guerrilla Funk’s resident DJ, handling tour duties with Paris and T-K.A.S.H. He also works with Enzyme Dynamite of The Bayliens. As a duo True Justice and DJ Lex released Volume 1 in 1997, Aural Sex Volume 2 in 1998, AP2K in 2000, and Pound Fa Pound in 2004. All releases quickly became local classics. The All Purpose DJs have excited crowds with icons such as Slick Rick, Biz Markie, Notorious B.I.G., Xzibit, Phife, Keak Da Sneak, Above The Law, and E-40.

In 2001, True and Lex toured in Osaka, Japan, garnering legions of fans of their dexterity on the wheels of steel. A bonafide student of showmanship, True continued to hone his craft, and in 2007, True Justice dropped his self-titled debut album and joined forces with The Bayliens — “Aliens from The Bay” — and dropped the CD Crop Circles in the same year.

From 2007 to 2011, True Justice toured worldwide with The Bayliens, Living Legends, Mistah F.A.B., Zion I, Paris, The Alkaholiks, Jeru The Damaja, Lords Of The Underground, The Beatnuts, Onyx, Redman and EPMD. Now, in 2015, he is poised to release his sophomore effort, The Man of Steel, on Guerrilla Funk, with production assistance by Paris and featuring Planet Asia and The Bayliens.