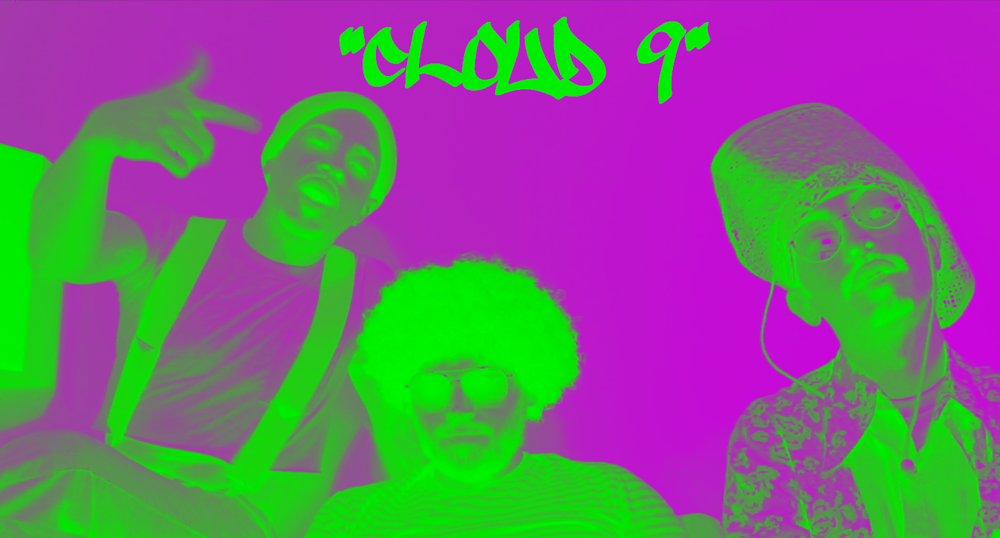 OFFICIAL WORLDWIDE HQ MUSIC VIDEO FOR RELEASE ON MAY 20, 2014

As summer approaches, Golden Goonz Entertainment brings you a refreshing break from the common hip hop model with a return to classic stoner music and original video paying tribute to Cheech & Chong.  With an original beat produced by Count Bluntas and the lyrical backdrop created by both F-DUB and Count Bluntas, the ”Golden Brothers” vibe is one that is perfect for marijuana smoking community and hip hop fans alike.  The beat will have your car subwoofer working overtime as the 808’s permeate like you just hotboxed your ride.  The feel is a smooth west coast track with an east coast twist.  F-DUB’s hook “Ooh I’m wasted, this kush got me faded, love purple haze that’s one of my favorites…” has a melodic flow and herbal essence that leaves fans in “Cloud 9.”  Count sparks on the first verse while F-DUB burns it down on the second.

The music video is more of a movie then a run of the mill cookie cutter hip hop video.  The Director, Dama Nilz, excels at getting the most out of her cast with her incredible vision and attention to detail.  Entirely Shot in New York City and Hoboken, “Cloud 9” has the “Golden Brothers” on an adventure beginning in Manhattan with their silly antics and chronic humor that continues throughout their journey which concludes at a hip hop contest in New Jersey.  Frankie Fingaz charisma as “The Stalker” resonates without having to say a word, while M-Geez & Zeps are hilarious as the other MC’s in the contest.  DJ Brown13 from the Turntableizm Show has priceless reactions to the events he witnesses and generates laughter with every mannerism.  “Cloud 9” has a slapstick atmosphere with stupendous fast-forward effects, eye-popping colors, and directly engages 420 lovers.

President and co-founder of Golden Goonz Entertainment, Steve Kalikhman, (aka Count Bluntas) is a super producer, enlightened MC, mixing engineer, video editor, creative director, and an information technology consultant. He is down to earth, intelligent, insightful, thoughtful, considerate, project oriented, focused, humble, and might be the 2nd most interesting man in the world.

Count was born in the Ukraine in 1977, and came to the United States in 1980 with his loving parents and older brother. Growing up in Brooklyn, he played sports in the street and the parks with the bigger kids. Hanging out with the older crowd, Count’s learning curve drastically increased as well as his maturity. As he got older, Count excelled in scholastic activities at James Madison HS where he received national awards and a scholarship. At Binghamton University he created and distributed mixtapes, worked at the local radio station, and received a Bachelor’s Degree in Computer Science.

In 2002, Count worked as a recording engineer at Beat Mechanics Recording Studio in Jamaica, Queens with legendary musician Master Shane (R.I.P). The following year, Count started assembling his home studio while sharpening his production and engineering skills. In the next few years, Count funded his own studio working full-time web development jobs in NYC. He would come home nightly and to build his skills producing and engineering music.

In 2012, Count joined forces with F-DUB and they co-founded Golden Goonz Entertainment, an independent music company based in Sheepshead Bay, Brooklyn. F-DUB has toured the Philippines, released multiple albums, found love, got married, and became a father. Count earned respect from the local music community with his extra crisp studio sound recordings and relentless work ethic. He’s added uniquely talented artists to the Golden Goonz roster including Bianco, Dama Nilz, Frankie Fingaz, Kool Da Great, MavriC, M-Geez, Moey Toons, The SPIX, Eturnal, and Zeps. Count’s recorded and engineered all these artists and produced most of the songs they released under Golden Goonz.

Count’s writing and MC abilities are on display with the release of “Future Paradise” co-starring Frankie Fingaz in 2012, then on “Down For The Count” in the summer of 2013, and finally on “Golden Brothers” co-starring F-DUB in 2014.

Striving for excellence, he continues to work overtime to keep Golden Goonz a fixture in the music community by continually creating entertaining content for the masses. Scheduled to be on tour in Corfu the summer of 2014, Count Bluntas is making waves across the Atlantic.

F-DUB was born in the United States in 1983.  He lived with his loving mother, stepdad, and younger sister.  Growing up in Brooklyn, he aspired to become a lawyer, while enjoying basketball and riding bikes with his close friends.  Hanging out with the older crowd, F-DUB always had people looking up to him.  Maturing quickly, F-DUB became a leader in his neighborhood.  As he got older, F-DUB went thru a lot of pain by losing his grandmother, who he was extremely close to, and by not having his biological father around to bring him up.  He was always in and out of school, so he had to attain his smarts on the streets in Marlboro projects.   As an adolescent, F-DUB was bitten by the music bug, when his mother played oldies in their home, like Michael Jackson, Donna Summer, Tina Turner and his personal favorite Diana Ross.

In 1998 F-DUB went by the name of Frank White while making music with his long-time friends Soze, NOM, AZ Blaze and others.  Making music for fun showed him that he can make something out of it, and he did, putting together his 1st mixtape (Up & Personal).  At the time, F-DUB was in love with his long time girlfriend of 7 years who made him back off music for a while.  In 2006, his relationship fell apart and he jumped back in the studio with Soze and Nom getting beats from both of them to record his debut album in Gravesend with producer & engineer Luminairy.  Completing his first album “Im Back At It,” generated buzz and respect on the streets.   Thanks to a suggestion by NOM, half of (Buc-cel), Hector changed his performer name from “Frank White” to “F-DUB” which means “FRANK IS DESTROYING YOU BASTARDS”.  The Album touched many people with hits like “Son of Sam”, “Oh Yea”, “My Life”, and “Don’t Come My Way”.  F-DUB’s name was cemented as a true hard-core street poet and his career was off to an excellent start.

In 2010, F-DUB was looking for a new sound as a landscape for his latest ideas.  One evening, he went to a show in Brooklyn starring Zeps, where he met Count Bluntas, a producer from Brooklyn, who gave him a beat CD.  F-DUB was enamored with the final instrumental which turned out to be the song “Move” from his second album “Franky The Fist.”  F-DUB career catapulted once he and Count Bluntas became a team.  Most of the production on the “Franky The Fist” album was done by Count Bluntas which created a bigger buzz for F-DUB with hits like “Came a Long Way”, “Get Buck”, and “I Don’t Care.”  This propelled him into making big moves like going on tour to the Philippines with his long-time friends, Mike Swift (Filipino rapper), & J-HON (Turkish rapper).

In 2012, F-DUB officially joined forces with Count Bluntas (President) and they co-founded Golden Goonz Entertainment, an independent music company based in Sheepshead Bay, Brooklyn.  The next two projects “Franky The Fist” and “The Lovey Dubby Show” became instant classics and made them become even bigger than before.  Respect was earned from the local music community with Count’s extra crisp studio sound, professional recordings, and relentless work ethic. Subsequently, they added uniquely talented artists to the Golden Goonz roster including Bianco, Dama Nilz, Frankie Fingaz, Kool Da Great, MavriC, M-Geez, Moey Toons, and “The SPIX” (Eturnal, and Zeps).

In February 2014, F-DUB’s enhanced writing and MC abilities were on display with the release of “Golden Brothers” co-starring Count Bluntas.  F-DUB blessed eleven buttery tracks with smooth flows and sick rhythm.  Two video releases “Cloud 9” & “Cant F*** with GnG” are scheduled for release in May and June, respectively.

On his way to the top, F-DUB never stops working to make Golden Goonz Entertainment stand out from the norm in the music community by providing listeners with high quality songs.  F-DUB has toured all over the world including the Philippines, Canada, California, Indiana, China, Japan, Norway and more.  F-DUB is making tracks all around the world, like a locomotive, he is unstoppable.  Stay tuned to see what F-DUB does next… GOLDEN!

Read more about F-DUB on the Golden Goonz Entertainment website.

Golden Goonz Entertainment LLC., established in 2012, is an independent music entertainment company. Golden Goonz creates positive thought provoking music for all generations to enjoy. Our main recording facilities are based in Sheepshead Bay, Brooklyn, NY. Lead by Count Bluntas (producer, engineer, artist) and F-DUB (artist), Golden Goonz is quickly gaining momentum both on the streets and the internet. Our supremely talented team of diverse musicians includes: Ayy Pii, Bianco Amaretto, Count Bluntas, Dama Nilz, Eturnal, F-DUB, Frankie Fingaz, Kool Da Great, MavriC, M-Geez, Moey Toons, The SPIX, and Zeps.  We strive to create entertaining music for the enjoyment of our listeners.  Thanks to everyone, especially to our loyal fans, for your continued support.